This is a beginner guide, not an Academic paper Also this is very summary and CTF-specific. If you are interested in Crypto check out crypto101.io
This Cheatsheet will be updated regularly

When you are trying to solve a Crypto Challenge for a CTF, first of all, you need to detect which Cipher is used.
For example if it’s a Symmetric or Asymmetric cipher, a Classic cipher or if it’s just an Hash.

Keep in mind that CTFs are meant to be broken so think before implementing a bruteforce over an AES-128 key.
Bruteforce may be present but only over a limited key-space or time-span

There are some tool to detect the hash type (if it’s not known), but a search on DuckDuckGo with the prefix hash will also do the trick.
If organizers are using a custom hashing algo you won’t find it, but I hope you will find out it’s custom (and broken).

Now that you know what hashing algo it is, most of the time you will need to find some sort of collision.

If it’s a (not-full) prefix/postfix/pattern collision, you can solve it by bruteforce.

Sometimes this falls under the term PoW (Proof-of-Work).

e.g. Calculate a string str such that sha1('SaltyToast'+str) start with '00000'
See this python script that solve the example above

Let a and a’ be strings with length(a) = length(a’) = multiple of input block length,
Let H0 be the hash function without length padding
Let || be the concatenation function
H0(a) = H0(a’) implies H(a || b) = H(a’ || b) for an arbitrary string b
Then the pair a/a’ is a reusable hash collision

In this case if there is a public known existing collision, you can append the same message to get another collision.

e.g. With this Python script

Given the hash H(X) of an unknown input X, it is easy to find the value of H(pad(X) || Y), where pad is the padding function of the hash. That is, it is possible to find hashes of inputs related to X even though X remains unknown.

Alternatively if the challenge is using a custom hash or if you want to implement your own length ext. attack you can follow this writeup from team spritzer.

I will report and decribe here their code for the extend function:
NOTE: SLHA1 is a custom hashing algorithm derived from SHA1

The extend code takes as input the old digest, the plaintext length, and the data to extend as ext.
In the first 3 lines we are reconstructing the padding that was applied to the text before the old digest.
In the fourth line we create a new SLHA1 object.
In the sixth-seventh line we use library internals to recreate the internal state from the old digest and apply the length
Then we perform the update with new data and we return the newly appended data (pad + ext) and the new digest.

On Caesar you can try a CiphertextOnly Attack (COA) aka Known Ciphertext Attack (KCA) by analizing the statistics of each character I’ve made a website that does this automatically by comparing the IC of each letter with ones from Italian and English dictionary.

This will only works if your alphabet is limited to: A-Z or a-z

An alternative can be xortool.

Also Caesar can be broken with a Known-plaintext attack (KPA).
If some messages are encrypted with the same key, you can recover the key from a Plaintext-Ciphertext pair and decrypt the other messages. (or part of messages).

Another demo is available here in this SECCON2016 challenge

In a Chosen-plaintext Attack (CPA) scenario, where you can input a plaintext in a Caesar encryption oracle, remember that shifting A by C will result in C, so a plaintext made of A’s will expose the Key as ciphertext.
This also works as a Chosen-ciphertext Attack (CCA) Like in this HackThatKiwi2015 CTF challenge

Vigenere is done by repeating Caesar for each letter in the plaintext with a different shift according to the key. You can try a COA once you have guessed the keylength (with Kasisky).
Or You can try a KPA or CPA/CCA like in Caesar.

XORing a Plaintext with a Key will output a Ciphertext that XORed again with the Plaintext will return the Key.

ECB is the basic of block cipher mode. Every block of plaintext is encrypted with the same key.
This cause that identical plaintext blocks are encrypted into identical ciphertext blocks; thus, it does not hide data patterns well.

And search each block individually in the Plaintext-Ciphertext pairs. This will give you the 16-byte corresponding plaintext.

Alternatively, if you have an Encryption oracle Attack available (that always use the same key) and the service append to your input a secret (secret suffix), you can go for a CPA.

This method will take max 256 attempt for the secret’s length, 4096 tries for a 16 byte blocks

In CBC mode, each block of plaintext is XORed with the previous ciphertext block before being encrypted. This way, each ciphertext block depends on all plaintext blocks processed up to that point. To make each message unique, an initialization vector (IV) must be used in the first block.

In a CBC Encryption oracle, If you can predict the IV for the next message (or simply it’s a fixed IV) you can verify if a previous ciphertext comes from a guess plaintext.

IV is not meant to be secret, because you can easily recover it.

If you have a ciphertext block, you can recover the key by letting someone decrypt C = C1 || Z || C1 (where Z is a block filled with null/0 bytes)
The decrypted blocks are the following 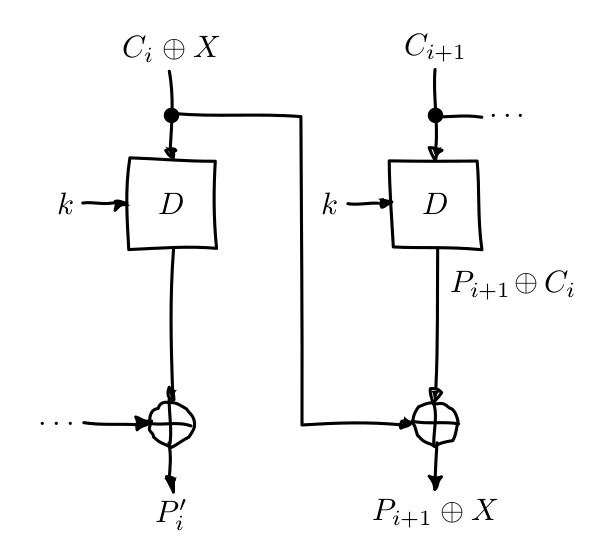 Note that if we XOR a ciphertext block, the next plaintext block will be XORed as well (X propagates like in the image).

If you have control over the plaintext P, you can fill a block P[i] with filler data Z that will be encrypted.
Once it’s encrypted you must find that ciphertext block C[i] and replace it with a XORed version of C[i], Z and your desired value G, like X = C[i] ⊕ Z ⊕ G. When the server will decrypt the ciphertext, will get a different plaintext P’ where P’[i] will be indecipherable nonsense, but P’[i+1] will be your desided value G.

e.g. This scenario is common in website where cookies that are stored encrypted in the client and the server will decrypt them for every request.
You can select a very long username or password that will act as Z and set G to something like ;admin=true;. :wink:

This vulnerability is possible because CBC is a malleable cipher (as seen in the bitflip attack).
If we make a small change in the ciphertext, when decrypted the resulting plaintext will have that same change.

This is not a strictly crypto vulnerability, but an implementation flaw.

The target is vulnerable if:

If the implementation is vulnerable, upon decryption we should have 3 cases:

Case 1
Valid ciphertext - Implementation works correctly
The ciphertext decrypts to the plaintext tom that is a valid user.

We will assume PKCS#5 is used, so the final block of plaintext is padded with N bytes of value N.
If the block is full, append another block full of padding (N = blocksize).

For convenience it’s better to work with the last 2-block of ciphertext, you can strip the previous one since we are working on recovering the last block backwards.

The objective is to recover D(C2), xoring it with C1 will give us P2.

The implementation will decrypt this input, check the last byte of P'2 and report an invalid padding error.

We can try all the values from 0 to 255 as the last byte in Z.
The only input accepted without the padding error will be the value that decrypt to 0x01 (a padding of 1 byte).

We repeat this steps backwards for all the length of Z to retrive the full D(C2) and P2 next,
finally we can also repeat this process block-by-block to recover the full plaintext P.

I developed a python program and library to automatically perform Padding Oracle attack.
Alternatively you can use PadBuster.

This attack can easily be prevented by checks that the ciphertexts are valid before decrypting them, by using encrypt-then-MAC or AE/AEAD.